I bought a j-head and it was sitting in my drawer for almost a year. I didnt realize i didnt know how to upgrade my existing MIX G1 hotend to a JHEAD. After some research earlier this year i set out on re-working the Extruder to support it, as it was obvious the stock part where just not compatible. As i started to build the extruder I also realized that the X Cartridge would not work with this setup either. The JHEAD is simple to big if compared to the Stock hotend, and it would just not fit into the extruder.

So i searched and found there was already an “upgraded” x cartridge that was printable (vs the Laster Cut i got with the printer). I re-worked it to support both the Mix G1 extruder, and lined up the holes for the WADE extruder. I also increased the size of the hotend opening allowing the JHEAD to fit! 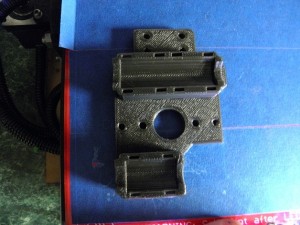 Next the Extruder was worked on. I increased the depth of the base, to allow for a mounting system for the JHEAD. two screws in the front allows you to screw the jhead in place. The back was lengthend for a future DUCT MOUNT that i am planning on designing.

Been printing whit this for over a month now and it’s working great!